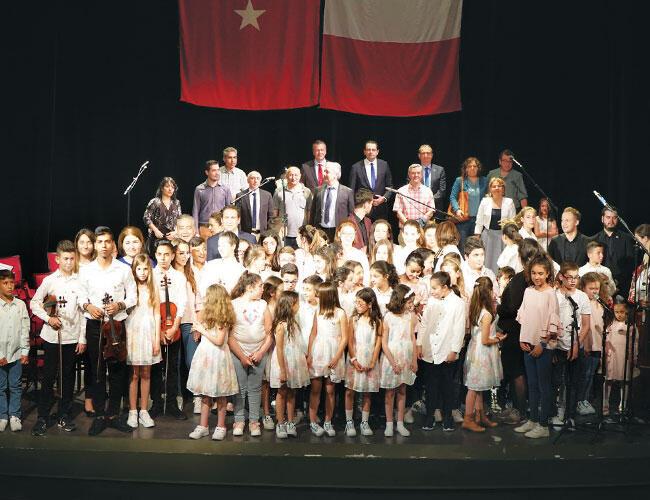 Istanbul’s Boğaziçi University will host the Olive Seed Children’s Orchestra in a performance on their campus accompanied by the Chromas Choir on May 21.

Thirty children aged eight to 17 from various schools in the Aegean town of Ayvalık will take the stage at the university’s Albert Long Hall on Monday as part of spring concert activities.

The Olive Seed is a social responsibility program under the leadership of the Ayvalık Municipality. The program has grown in the four years since its establishment in 2014 with the efforts of volunteers, including academics, artists and university students, who provide musical training to the children among others.

Inspired by a project she had seen while abroad, Gül Gürsoy, the coordinator of the Olive Seed Foundation, hit the road with the foundation’s president Zehra Kundak, to visit schools in Ayvalık and the surrounding villages to reach talented yet disadvantaged children. In four years’ time, the project has reached more than 1,700 children, according to Gürsoy, who is a graduate of Boğaziçi University.

Members of Olive Seed experience a number of firsts, like the first time away from home and the first time on an airplane. On a trip to the capital last February, the children visited the conservatory and had a chance to meet prominent Turkish pianist Gülsin Onay and watch the Nutcracker ballet at the Ankara State Opera and Ballet.

Recently last April, their journey took them beyond the borders of Turkey.

As part of celebrations for Turkey’s National Sovereignty and Children’s Day on April 23, they flew to Paris. The Olive Seed Children’s Orchestra and Choir gave two concerts as volunteer ambassadors of UNESCO in Paris. The 47 children performed two concerts respectively at the Theatre du Gymnase Marie Bell and at the FIAP Jean Monnet Centre. The children visited the UNESCO headquarters and had a chance to get to know other cultures.

With their performance, the children have contributed to the international reputation of their local town of Ayvalık at an early age, as Ayvalık was listed as a UNESCO World Heritage Tentative Site last year in Paris.

After that trip to Paris, the young musicians who continue their journey titled “A Beautiful Journey” will bring their newly acquired musical experience to spectators at Boğaziçi University, which has been a main supporter of theirs all along.

All the revenue from the concert will be used for school projects in Ayvalık in the summer and winter.